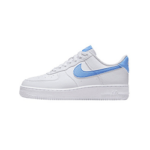 The simple, clean and classic design made many people buy at least one pair of Nike Air Force 1 in their lifetime. There are even those who don’t wear anything else on their feet – Dr. Dre for example. The businessman and music producer pulls a fresh white pair out of the box every day and we can’t blame him at all. The sneaker is easy to combine and fits every occasion. So if you’re currently buying a fresh pair of Air Force or just want to find out more, then you’ve come to the right place.

You didn't find what you were looking for in our overview? Then take a look directly at Nike:

The Nike Air Force 1: the cult model of the Swoosh

The mix of unique NASA technology, clean design and real know-how from professional sports make the Air Force 1 one of the best-known and most popular sneakers in the world. For rapper and producer Dr. Dre, the soft spot for the sneaker even goes so far that he won’t let anything else touch his feet: Every day he takes a new white pair of Nike Air Force 1 out of the box – one for each day of the week.

But there’s much more to the hype surrounding the Air Force 1 than a very special design – namely, a lot of technology and skill. In this article, you’ll find out what this cult model from Nike is all about and which variants are at the forefront.

NASA and the presidential plane

For the Air Force 1, Nike brought out the big guns: The sneaker was the first basketball shoe with the revolutionary Air Unit of a NASA engineer and was named by designer Bruce Kilgore after the plane of the American president. Visually, Kilgore was inspired by Notre Dame, creating an absolutely timeless sneaker that would become one of the most successful silhouettes ever.

Kilgore had no idea of the later hype surrounding the Nike Air Force 1 when he released the first basketball shoe of his career in 1982. But he took a liking to sporty models and tennis models like the Avenger or the Air Ace followed, as well as other models for the court like the Air Jordan 2.

But behind the design of the first Air Force 1 was a lot of trial and learning. After several failures, Kilgore and his producers found the ideal shape and showed the Spanish manufacturers how he envisioned the multicolored sole. It was also Kilgore who personally drove the first samples in a pickup truck to college basketball players to get initial feedback and to adapt the shoe even better to the needs on the court.

But if you think Kilgore has saved one of the original models as a milestone of his career, we’re sorry to disappoint you. When he does wear Air Force 1s himself, he only gets a very special one-of-one edition from fellow designer Mark Smith on his feet: this particular pair of AF 1s has been outfitted with personal memories and a special memory foam. It also bears a personal dedication on the insole – he guards this pair like the apple of his eye!

From Court to World Fame

The breakthrough of the Air Force 1 in basketball at that time was mainly due to the sophisticated technology of the kick: aerospace engineer Franklin Rudy had developed the famous Air Unit in the seventies for the Nike Tailwind. The shoe was so much in demand that Nike took the plunge in 1982 and equipped the first basketball shoe with the revolutionary cushioning: the Nike Air Force 1.

Due to the stability of the belt and the optimal cushioning of the shoe, which nevertheless guaranteed maximum flexibility, it became highly sought-after equipment for professional sports. Basketball greats like Moses Malone quickly made the silhouette a star on the court, but the shoe became a cult through the hip-hop scene in the early 2000s.

In addition to the technical gadgets, Kilgore has focused on a clean design – so the original Air Force 1 goes with almost any outfit. If you like it more eye-catching, choose between the countless trendy colorways and material combos: From Icy soles to denim, satin and suede to buckles and colorblocking, it’s all here! These can be both holiday inspired like the Air Force 1 Easter or there are updates to the original silhouette, such as with the Air Force 1 Utility Sketch Pack. Of course, there have also been hip collabos with the Air Force 1: Off-White and Travis Scott, for example, have already put their hands on the kicks, causing sold-outs. At “Nike By You” you can even create your very own sneaker and secure yourself an absolutely unique piece!

The cult model and its variants

The original model from 1982 was released in clean white and as a high-top with belt. In the meantime, there have been countless colorways of the cult sneaker in high-tops, mids and lows, with the low version being particularly popular in the lifestyle sector. While the shoe was initially hyped especially in white and among rappers, there are now also fresh colorways for women. Special styles of the Nike Air Force 1 Women are for example the Swarowski or the LO’07 with the double Swoosh. We would like to introduce you to a few particularly popular variants of the Air Force 1.

The original Air Force 1 served as a model for the 1’07 and so this street style variant was provided with the same comfort: the Air cushioning, robust stitching, a padded shoe collar and the grippy sole provide a durable and comfortable shoe. At the same time, the Air Force 1’07 got a little facelift – but stayed absolutely in the look of its predecessor with the perforated toebox, premium leather and eighties vibe. Meanwhile, there is also a sustainable version of the kick – the Air Force 1’07 Next Nature. This sneaker is partly made of synthetic leather and at least 20% recycled material – an important step towards a sustainable future.

The Air Force Shadow was in the right place at the right time – and shows the current trend of our generation in detail: With special highlights such as the double eyelets, two mudguards or even the midsole in chunky style, it mixes up the original neatly – but still remains true to the classic basketball look in the base. The different layers and the double branding emphasize the classic silhouette from the eighties and at the same time pick up current trends – a stylish version of the popular classic.

Another street style variation of the classic Air Force 1 is the Pixel. The special highlight of this silhouette is the platform sole, which is reminiscent of a pixelated image due to the offset elements. The tongue tab is adorned with a new graffiti-look logo and the Swoosh looks stamped in – the details of the Pixel look. This elevated version of the original basketball sneaker could not better pick up the current fashion trend and is therefore hyped especially by the female sneakerheads.

The AF Mid is equipped with all the technical and optical refinements of the Low, but also has a medium-high cut and a Velcro closure above the lacing. The AF High also performs with a collar above the ankle, which is even a bit higher than the Mid variant. For optimal support, there is again the typical Velcro closure.

What are the collabos on the Nike Air Force 1? Where can I buy the AF1?

With its uncomplicated yet aesthetic design, the Nike Air Force 1 serves as a good base for collabs. Most recently, Off-White and Travis Scott laid hands on the brand’s best-selling shoe and the results were always sold out immediately. The Air Force x Off-White and the Cactus Jack are currently only available for a multiple of the price in the resell at Stock X.

Those who like to help design what they rock can let loose at Nike By You. Recently, they collaborated with Levi’s here and sneakerheads were able to design their own custom jeans-inspired pair. What’s cooler than buying the AF 1 you designed yourself? Definitely not much.

Whether you wear them with sweatpants, jeans or cargos, AF1s always fit the bill. If you don’t have a pair yet, it’s time to get your first Nike Air Force 1. Find out which styles you can get where here.

The Air Force 1 – a real milestone

With the Air Force 1, Kilgore not only set a milestone for his own career – the release of this model was also an important step for Nike in defending their position at the top of professional sports while gaining cult status in the lifestyle sector.

The silhouette currently fully meets the zeitgeist of the young generation and is a perennial favorite among sneakerheads. At the same time, it is a symbol of hip-hop culture and has become an icon through limited collabos and colorways. The more than 2,000 variations of the Air Force 1 have not only had a lasting influence on basketball, but also on fashion, music and sneaker culture. We’re excited to see what styles Nike will come up with next for the Air Force 1 – well done, Swoosh!

So that you don’t miss any of the upcoming releases, get our free app and always get all the news on your phone. If you have any further questions about the AF1, you can also reach us on Instagram or Facebook.