Long time no English post and post in general! No I'm not Christopher, it's your girl Silvi. Those who follow me on Snapchat or Instagram know that I was in Berlin from the 8th-9th December. I was there to celebrate the opening of the new SNS Store in Berlin. I'm a big fan of Sneakersnstuff and got a lot of hyped pairs from the SNS online shop. No matter how hyped to shoe was, chances were always good that I could get my pair. For those who hate on my Nike AM97 SP JCRD ‚Rio‘ because they're jealous…guess what? I got them from SNS as well haha.

To celebrate that, I was wearing my Rios when I had the chance to have a fika with Erik Fagerlind and Peter Jansson, the founders of Sneakersnstuff! Some of you might be like: what in gods name is a fika? It's the Swedish term for a coffee break. If you don't know now you know!

Enjoy the first part of the interview and make sure to check out the store when you are in Berlin! Schönhauser Allee 6/7 in Mitte it is! The doors are open from Monday – Saturday 11AM – 8PM. A huge shoutout goes to Nike for making this trip happen. Thanks for having me! x 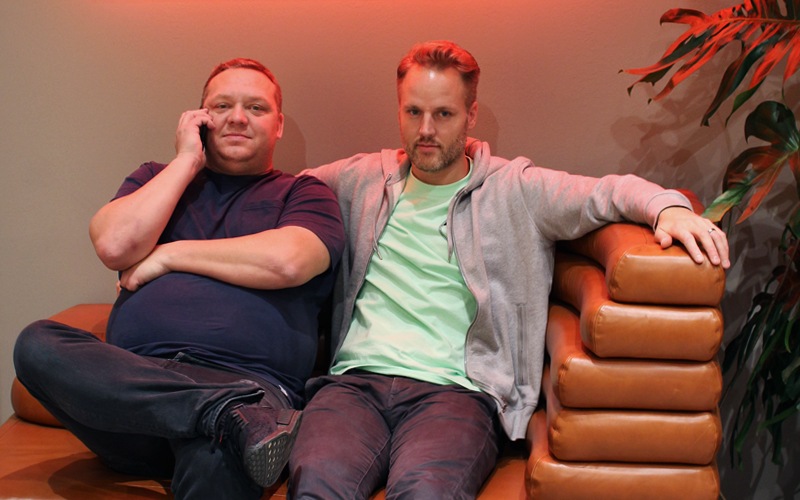 (Peter & Erik having a lil break after the interview)

What is the concept of Sneakersnstuff?
Erik: For all the stores we do we try to do something different. It's not like we have a firmed concept like McDonald's. The stores will never look the same. Jenny who is our interior designer wanted to interpret the neighborhood and the history of the building. We kept a few old things like the windows and the sealing, but also integrated a lot of new things. A table that has the shape of a sausage for example. There are a lot of hidden details, such as the shell toe wallpaper in the adidas corner, or the chair back made of swooshes in the Nike corner.
Peter: The guy that was handling the location scouting came up with this place. He was looking for the perfect space and found this. When we first saw it, we were like ‚yes, we will have it. We take it‘ and they said ‚by the way there is club in the basement‘. We thought we would use it as a storage room, but it turned out to be a huge space with this epic bar and stage. Now we have a club all of a sudden, that we can use for special events or just fun. 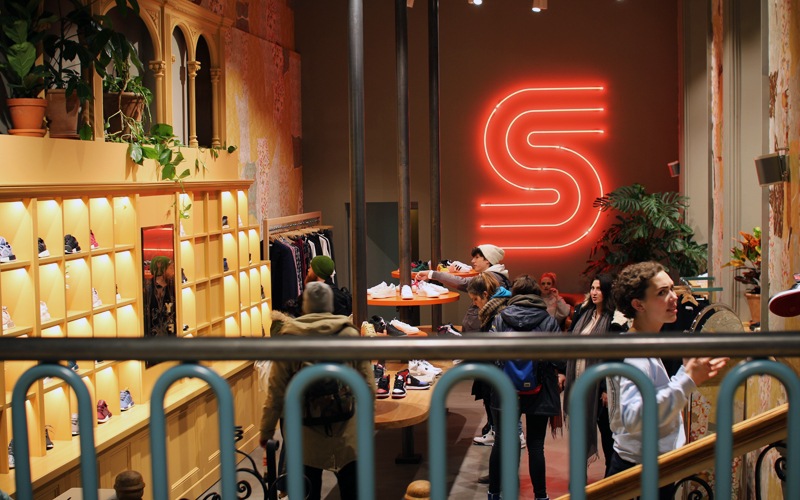 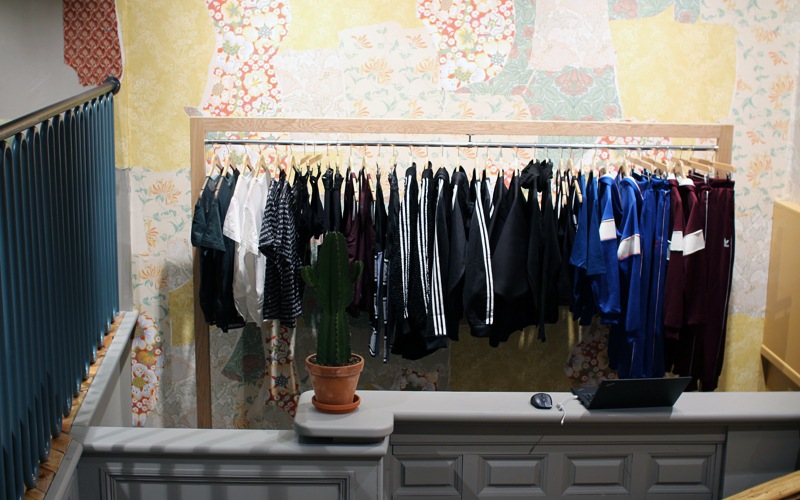 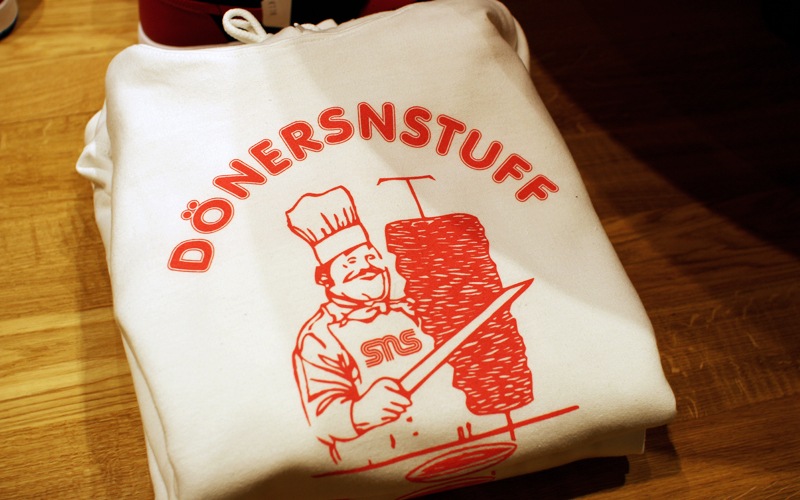 Can we expect a monthly party now?
Erik: The idea for us is to do it once a month. Eventually we can host other parties. It's not our core business, but it was so cool to welcome everybody downstairs after the meet and greet in the store.

What do you think about girls in the scene?
Erik: We like girls! For us it always has been natural to have stuff for girls as well. The scene was different back then, but we always had a 50/50 ratio.
Peter: We even had a womens only store next to a mens store back in 2000. That was 16 years ago. Just one year after we opened the first store, we had to expand. So we always had a lot of respect for women and of course it's a lot more fun when good looking girls come in. Our customers don't want a girly shoe. They want a mens shoe in a small size.
Erik: We are growing with the hype products, but since the brands don't have too many hype products for women, it's not growing as fast as the mens stuff. I think there is a gap in the market. Girls don't want to buy unisex only. Brands need to understand that our customers are around 23 or even 30/35. Those girls don't want to wear kids shoes. 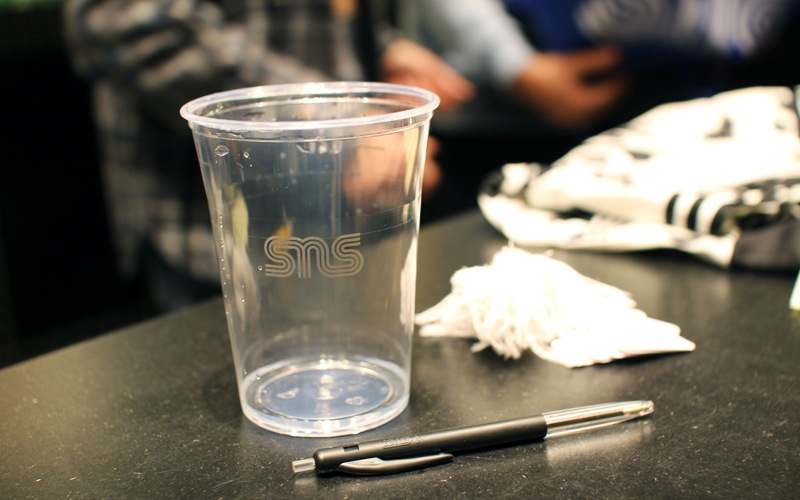 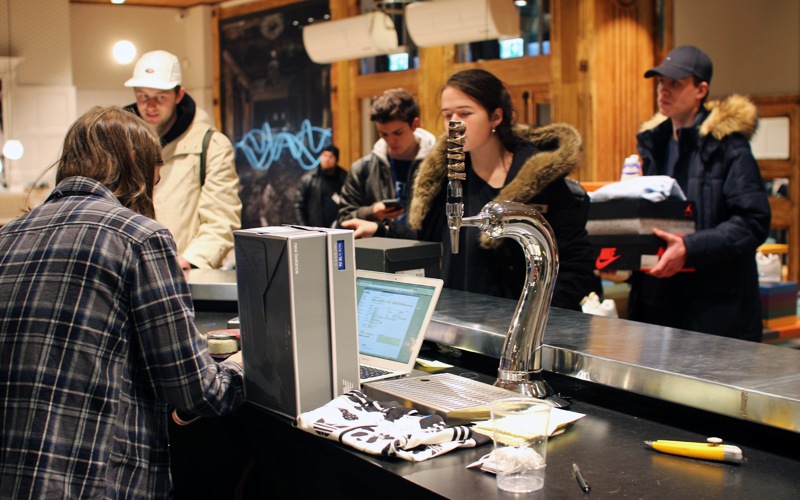 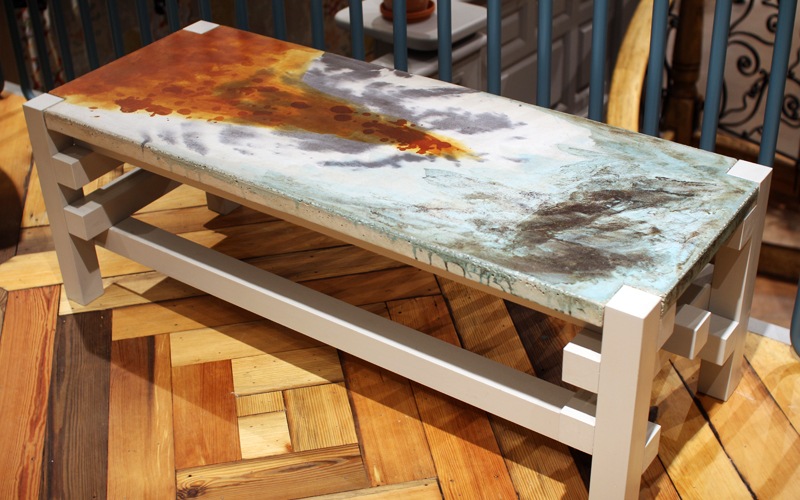 What do you think about extremely limited releases? How would a perfect release look like?
Erik: I think it's a gift. I'm not against creating the hype. You can't deny the fact that it's working. I think there is a difference to think that you are creating a product for 20% of the market and then guessing that the market is only 50 000 people, but the market is actually 500 000. If you did 10 000 pairs, you only produced 2% for the market. So it's something that is shifted. What is the perfect release? I don't know. I think we are working on it. Even if the production would triple, I'm not sure if that's the solution. We all are working on it.

Would you say it's better to produce more?
Peter: Yes and no. Obviously certain styles that are super hyped, people flip ten times the money for them the same afternoon. I guess there is a reason for that. But if you look at other shoes that are super popular, they tent to not sell out in certain regions. The brands supply Footlocker or JD Sports with the cool stuff. But I don't think that a JD Sports can handle hyped products. If you go to a store in the airport in London, they will still have the shoes that were sold out n minutes everywhere else.
Erik: Brands should supply the experts, not just the niche stores like JD Sports and Footlocker. If I would like to buy a TV, I won't go to a mall. I would go to an expert. Same as the coffee that we are drinking right now. It's made by people that have a passion for what they do, by people that love what they do.
Peter: Experts will always survive. It doesn't matter how big you are. The consumer will see right through you. 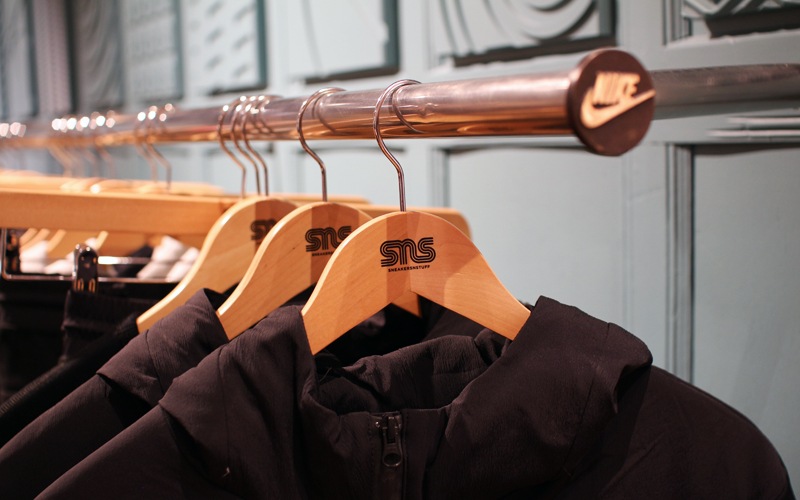 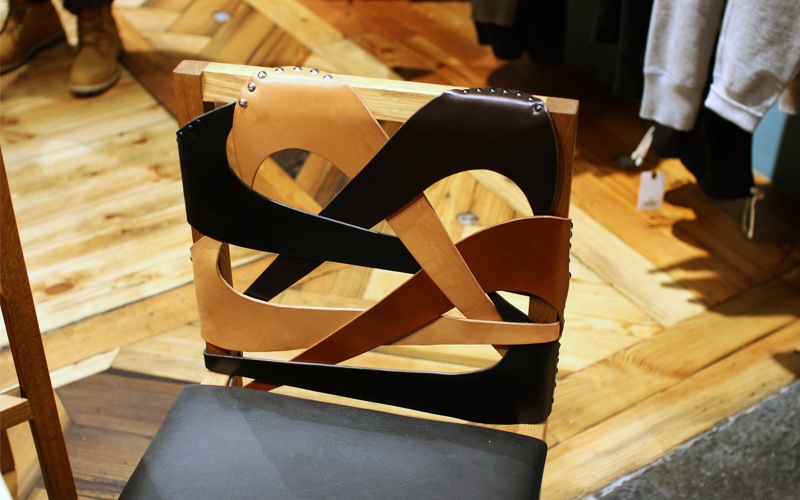 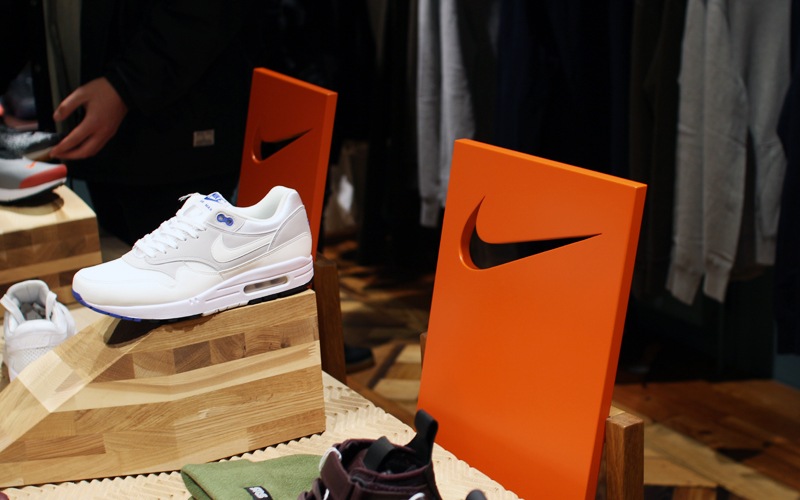 Erik: I think you have to offer more. We are offering an experience that Footlocker can't provide. The hype is not even half of our business, not even 20%. We want to serve everyone. People come in our stores to get inspired, to talk to our staff. People that come to our stores, come in to get inspired. It's all about personality, which is washed away in bigger concerns. For them it's all about the concept and marketing strategy. If you are too perfect, the personality won't shine through anymore.

What inspires you?
Erik: It's funny because we were just having this conversation of what inspires us. Back in the days when you wanted to watch a movie you would go to a video store. The staff would ask what you like and usually pick what's possibly the best for you and it was always a good recommendation. That's what we want as well. Our staff loves what they do.
Peter: I don't like slogans that say ‚this and that approved‘. Everything you find in our store is approved. Everything is picked by us. We can't just have certain things that are approved and the rest is not. I think it feels more premium to get it at our store. 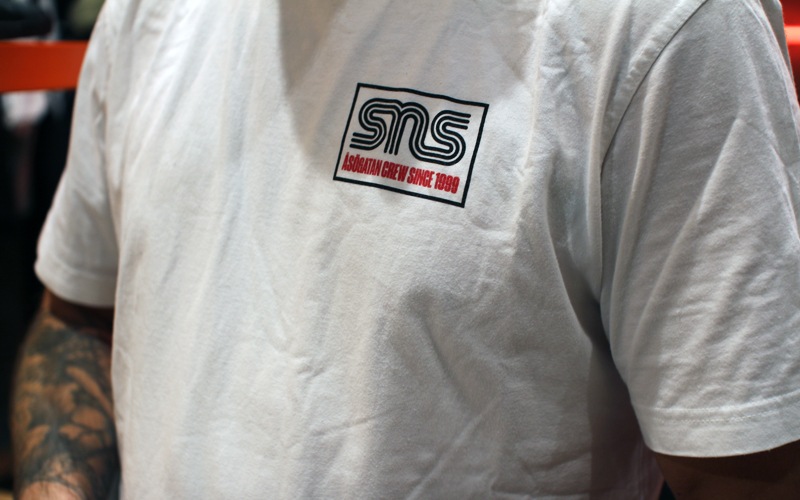 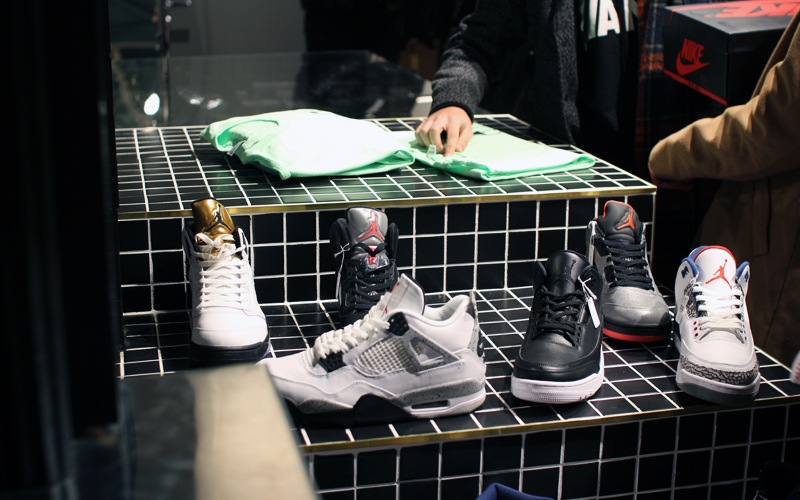 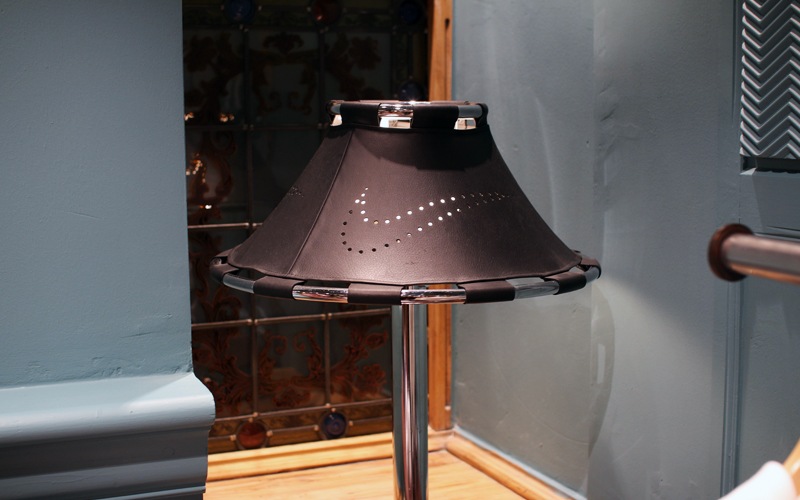 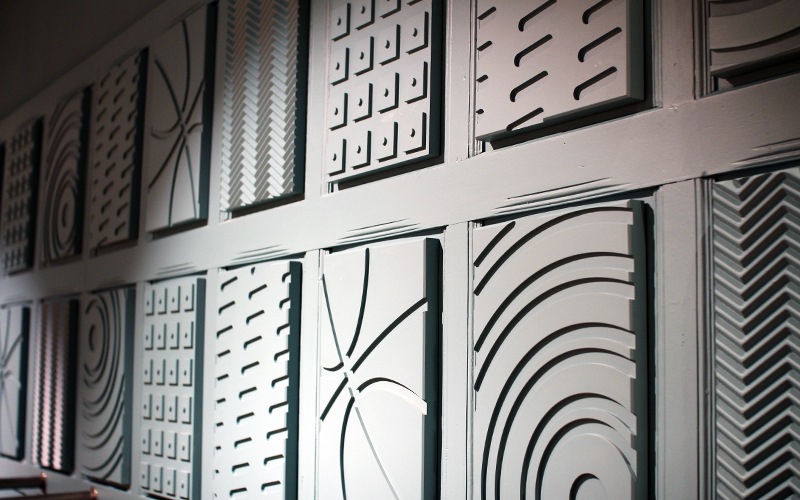 Hottest News Of The Week