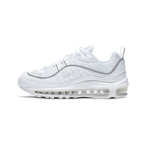 The successor to the popular Air Max 97 has stayed a bit under the radar, but it’s no less impressive in terms of design. The Air Max from 1998 comes with the same sole as its predecessor and thus has a consistently visible Air unit. In this overview you will find a list of all current models and where you can buy the Air Max 98:

What is the history of the Air Max 98?

While the other Air Max models, like the 95 or the AM 1 became instant classics, the Air Max 98 had it a little harder.

Sergio Lozano, who had already designed the AM 95, was again in charge. When comparing the two sneakers, you will not immediately find similarities, but at a second glance you will. Here, too, the upper was equipped with lines inspired by rocks, which were modeled and worn by natural water sources; this was already the case with the 95.

Which colorways can I buy of the AM 98?

The first colorway you could buy the Air Max 98 in was the Gundam colorway – a loud colorway in blue, white and red. Later, a version in Cool Grey Volt was also released. A colorway that was reminiscent of the Air Max 95 OG. The other colorways in which the Air Max 98 was available for purchase in the same release year were the Tour Yellow and the Team Orange.

After the AM 98 was somewhat forgotten in the following years, it was Supreme New York who brought it back on the radar. They released a total of four colorways on the sneaker in 2016, which are relatively affordable today – the most expensive of the drop, you can get for under 500 euros at StockX and co.

The Air Max 98 Gundam, Tour Yellow etc came back in 2018 and can currently only be purchased on second market platforms such as Klekt or StockX. In addition to the Retros, Nike also released new colorways, such as the Thunder Blue or the Cone.

In the search, you actually find what you are looking for. The Air Max 98 is available in various colorways at retailers like Keller X, Snipes and Foot Locker. For new drops, you should check out chains like Snipes, Solebox or small stores like asphaltgold or 43einhalb. Of course, all colorways are always listed in the Nike online store or in the SNKRS app.

The best way to find out where you can buy the latest Air Max and where the upcoming drops will be released is to download the free Dead Stock app. We’ll keep you up to date on sneaker releases, where they’ll be available, and when they’ll drop.

If you want to keep up with all the latest news from the sneaker world, feel free to follow us on our other social media channels: