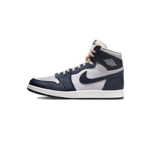 Here you can get all information about the Air Jordan 1 High:

The Nike sneaker, which is said to have started the hype about sneakers, is called Air Jordan 1 High OG according to the box label. We’re talking about the first silhouette ever designed and produced for Michael Jordan. You have to imagine how much history was written in this sneaker. So the “OG” on the black and red box is more than justified. There are now countless models whose prices have skyrocketed. To buy an Air Jordan 1 from 1985, you have to calculate with 5-digit prices.

You can find out where you can buy old and new Jordans by simply scrolling down.

What are the collabos on the Air Jordan 1 High?

The launch, the brand legacy from the best basketball player ever, is still incredibly popular even far after the end of Michael Jordan’s active sports career. The sneaker is so popular that fashion designers such as Virgil Abloh or Off-White, Travis Scott and most recently design house Dior have not missed the opportunity to release their own version of the icon. The latter edition went for 2,000 euros over the counter at launch. Attention, we are not talking about the resell price here. If you were lucky enough to win one of the crowded Raffles, you could buy the Air Jordan 1 High Dior for a whopping 2K. There is to add here that depending on the size, it could go for 10 times that on StockX.

Usually you can get a 1er at Solebox, Overkill, SNS and Co already for about 160, – euros.

In addition to designers and rappers, selected stores have also had the honor of designing a collaboration on the Sneaeker. A boutique in Los Angeles called Union was even allowed to release two colorways.

Were all colorways of Air Jordan 1 High worn by Michael Jordan?

Since, the AJ1 High always further released, Michael Jordan, they have at least not all worn on the court. Those that have touched the hardwood are the so-called OG colorways. Examples of these are the Jordan 1 “Chicago”, the “Black Toe” or the “Bred“. The black and red model, was initially banned by the NBA, which is why he later came back as a “Banned Edition”.

Although these colorways are not collabos and no designer except Peter Moore was involved, the sneakers are still hard to buy in the original colorways. Well, if we’re being completely honest, almost every new release from the High OG always goes out of stock very quickly. There are few silhouettes that are so timeless.