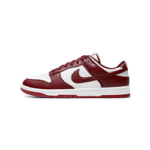 The Nike Dunk Low has been one of the most popular models of the new sneaker generation for at least two years. It feels like everyone who is even remotely interested in sneakers has liked the silhouette. So it’s no wonder that you too are currently looking for a colourway that reflects you and your style. On this page you will find all current and future Nike Dunk Low releases clearly summarized. Whether for men or women. Simply click on your favorite model and see directly in which of our partner shops your favorite Dunk is still available.

Dunk Low The Future is Equal

Dunk Low Year of the Rabbit

Why so sad? SB Dunk Low

The history of Nike Dunk Low

The silhouette itself was already born in the 80s of. The famous Nike designer Peter Moore was then leading the creation of the model. First, the Nike Dunk High debuted on the basketball court and quickly became one of the most popular shoes among players in the NBA. Then in the 90s followed the first big skateboarding boom and even a brief appearance in the movie “School Daze”, which also starred Spike Lee. Many skateboarders discovered the potential of the model for skating, which was probably mainly due to the midsole, the shape as well as the cushioning of the silhouette. Nike recognized this and was so clever to use the hype and with Nike SB to call its own franchise, only for skateboarding into being.

To finally get the hype train rolling, Nike brought a smart move in 2020. Travis Scott, a musician who has polarized for years, was allowed to launch his own Nike SB Dunk Low with Nike Skateboarding. Needless to say, the model was super in demand and quickly fetched a four-figure amount on the secondary market. To this day, the Nike Dunk Low by Travis Scott is one of the most popular models of the new SB Dunk hype.

The most popular general release of the Dunk Low

Lately, it has become clear that the Panda Dunk Low is probably the most popular Dunk on the market. The Panda Dunk is very hard to get everywhere, because it is always completely out of stock as soon as it drops at one of our partners. But also the UNC, Syracuse and all other college dunks are very popular. If you don’t want to miss a possible restock of the models, just turn on the push messages in our free app.

In case you didn’t know, other highlights of the past few years include limited releases from Ben & Jerry’s, OFF-WHITE, Grateful Dead and of course Supreme.

How does the Nike Dunk Low fit?

The question of how the Nike Dunk Low turns out is very easy to answer. The Dunk fits exactly like its big brother, the Air Force 1. So it’s best to take your normal size. If you like it a bit more airy, you can go up half a size. Ih should take the Dunk but in no case smaller, because “otherwise the shoe presses”.

Where can I buy the Nike Dunk Low?

Although the silhouette is always in high demand, it is now easier to buy a Nike Dunk Low. The model is available in good sizes and variations in the Nike online store, at JD Sports as well as Foot Locker. Also small stores like Overkill and asphaltgold are often in the game and have models like the Court Purple and the Panda Dunk at the start. As I said, it’s best to just click through this overview and get a little inspiration.

Nike Dunk Low clean – this is how it works

So that you have something from your Dunk for a long time, you should clean your sneakers regularly and at least clean them from coarse dirt. There are various sneaker cleaners on the market, all of which have proven themselves over the years. Just have a look around or send us a message if you want us to make a recommendation for your Nike Dunk.

All hyped Dunk releases are always sold out right away?! We can help! So that you don’t miss anything in the future, we advise you to download our free app for current sneaker releases. This way you will always get all the news sent directly to your mobile device. If you have any other questions, you can also reach us on our social media channels like Instagram and Facebook.